Where the journey for African Asylum seekers begins in Israel. Global refugees struggle to overcome adversity in a new land fraught with insecurity and conflict.

“Where the journey for African Asylum seekers begins in Israel.”

“Global refugees struggle to overcome adversity in a new land fraught with insecurity and conflict.”

Levinsky Park, a 66 minute documentary, tells the simple stories of residents, refugees and activists riding the tide of history in Tel Aviv, Israel. Through the lens of an asylum seeker from Darfur, long time residents of the community, and a human rights activist, we explore the contours and nuances of the refugee story. Particular to Israel’s refugee history, the film examines the subtle ways in which unrest exacerbates community tensions uncovering the global crisis pervading the world today.

Today, in an area of Southern Tel Aviv, interspersed among the multicultural mix of Middle Eastern and European Jews, one regularly sees sub-Saharan Africans. Near the old central bus station, many of them are quietly carrying the fresh wounds of war, persecution and displacement. Few are in possession of official work permits, seeking jobs under the table, and finding a modicum of refuge in nearby Levinsky Park.

The ways in which Israel, a country, itself, comprised historically of refugees, has responded to this unique migration reveals the conflicted views with which so many in the world are reckoning in the current refugee crisis. Some Israelis have embraced the new refugees, even creating food and clothing stations in Levinsky Park to support them. Others have impugned the Africans as outsiders, who show little interest in Jewish culture and life, and who are driving down wages of ordinary Israelis. Politicians have capitalized on these anxieties by passing harsh anti-immigrant legislation, building an enormous fence on the border of Israel and Egypt, building refugee detention centers and camps, and even paying Africans to resettle in other countries.

In sum, the film presents a clash of two worlds: that of long time residents who have lived in the area since the aftermath of WWll and that of thousands of recent migrants and refugees mostly from sub-Saharan Africa, who cross the desert to reach freedom.

Theres a global crisis right now. Instead of feeling distraught and helpless we have turned our camera directly on the asylum seekers and denizens living in south Tel Aviv to provoke constructive dialogue.Keeping the ever changing politics to the background we are focused on the lives of a few refugees, their children, the liberal activists and the ordinary citizen upon whom the refugees have descended. People who have nothing at all facing elemental struggles in a land fraught with conflict and founded by refugees proves to be fascinating viewing for the probing mind.

UPDATE:
“Extreme times require extreme measures”. After being embroiled in filming refugees and asylum seekers in south Tel Aviv for five years, I feel directly tied to the global refugee crisis. The fight in Levinsky Park is an example of the global fight for and against refugees all over the world. The refugees in Levinsky Park are experiencing hardships everyday that keep them fearful of being rounded up. Confusion abounds because the law is unclear. In the U.S., Immigration Customs Enforcement (ICE) is cracking down. It is conducting raids, asking people for IDs and trying to force people to sign deport orders.

I believe the Executive Order issued, banning refugees from seven countries, is an extreme measure contra to the 1951 refugee treaty and the US Constitution. Instead of taking news I decided it was time to make news. Being a lawyer as well as a filmmaker, I responded by volunteering at Newark International Airport with other lawyers to be present, ready to assist any traveler being detained or deported. I have encountered Syrian nationals with permanent U.S. residence status questioned intensely. Most student and work related visa holders were stopped from boarding to the U.S. from Europe. We were told that some were given papers to sign to relinquish their visa. Customs and Border Patrol are reluctant to let detainees know that lawyers are waiting outside to help and eager to send people to detention centers.

We are all living in Levinsky Park now.

Cindy Kaplan Rooney is a highly experienced creative documentary editor since 1983. We are lucky to have her expertise in our film. Credits include NY Med, winner of the CINE Masters Series Award, the Peabody Award winning Hopkins, and Masters of Disaster, which received an Academy Award nomination for Documentary Short Subject. Her work on The Brain series for PBS received an Emmy Nomination. Other notable credits include With God on Our Side: The Rise of the Religious Right in America, Gangs Escaping the Life, and Local News: One Station Fights the Odds.
IMDb PAGE 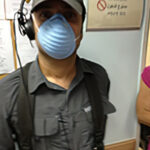 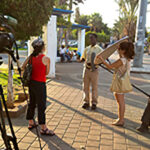 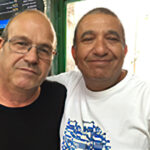 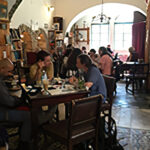 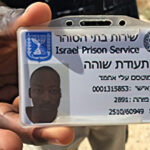 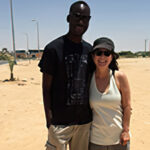 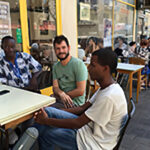 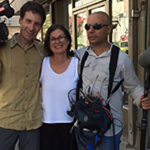 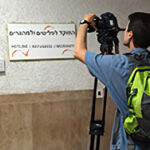 Amir gets close up of Hotline for Refugees & Migrants sign 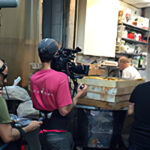 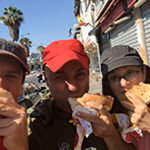